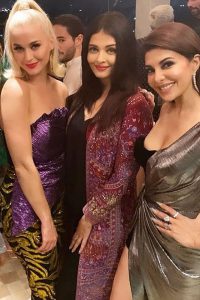 Katy Perry is in India and will perform at the OnePlus Music Festival which will also see the likes of Dua Lipa, Amit Trivedi and many others taking the stage.

Perry wants to enjoy every bit of her time in India. The American pop diva, who will perform live in Mumbai over the weekend, shared that she wants to “indulge in all things Indian“.

While in Mumbai, the 35-year-old singer was invited by Bollywood filmmaker Karan Johar for a lavish party in her honour. “So, I am going to a really fun party. I am going to meet some Bollywood people, I am going to be hearing some incredible bands. It has been a long time since I have been here. When I was here for IPL cricket (in 2012), I really didn’t get much time to immerse myself. So, this time it’s all about immersing and educating myself,” she revealed in an interview with IANS.

“#AliaaBhatt, #KaranJohar and #VijayDeverakonda caught in conversation with #KatyPerry.”

Pics from her party in Mumbai last night show Bollywood and South Film industry stars in conversation with her. Many glamorous pics and videos have surfaced on Instagram and are to really look out for.

Many videos show Perry in candid conversation with stars. Maybe she wants to accommodate any in her upcoming projects.