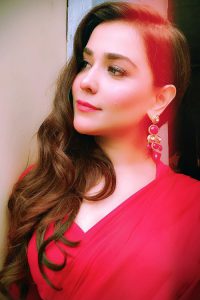 It is not the first time that Humaima Malick has called out Momina Mustehsan on social media. But this time she is not coming slow.

Social media had a field day after the video of Momina Mustehsan rather lethargic performance at the 18th Lux Style Awards went viral. Like everyone else, Malick also had her own thoughts about it. In a now deleted comment on Instagram, the Bol actor revealed how two performances at the award show were ‘dropped out’ in order to accommodate the Afreen Afreen singer’s performance.

“Two singers, male and female were dropped out last minute for this big performance,” wrote Malick, following it by a not-so-subtle dig at the singer, “God bless parchi system but it’s so cute.” She then added how Qandeel Baloch might have performed better than Mustehsan. “May Allah bless Qandeel Baloch’s soul. If she were alive, she would have performed way better.”

Momina, on the other hand, shared a video of her rap song from the awards and wrote, “Here’s to women creating their own opportunities with resilience and believing they’re much more than someone’s perception of them. And most of all, owning themselves for whatever they are – unapologetically.”

Dekhe woh jo dekhe woh hai, uss se kae zayada #LSA2019 Here’s to women creating their own opportunities with resilience and believing they’re much more than someone’s perception of them. And most of all, owning themselves for whatever they are – unapologetically. Thank you @friehaaltaf for letting me conceptualize, direct and produce this segment. More to follow. @iamevaab @abhijitvaghani @rzaashaa @rauffasiha @raoalikhan @wahab.shah

“Thank you Frieha Altaf for letting me conceptualise, direct and produce this segment,” she added. However, this isn’t the first time Dekh Magar Pyar Say star publicly bashed Mustehsan. In 2017, she slammed Mustehsan for her stance on Qandeel Baloch. The Awaari singer, who has been an active advocate of women empowerment had shared how Baloch’s only asset was her body.

“Qandeel Balouch was not an epitome of women empowerment,” Momina had shared. “If anything, she was portraying the opposite: the only asset a woman has is her body.” The singer later took to social media to express her support towards Mahira Khan, who was trolled for leaked images with Bollywood heartthrob, Ranbir Kapoor. The Awari singer wrote, “Jesus. Can we please give Mahira Khan a break?! Why are we so quick to judge and attack?! Esp if it’s a woman in question. It’s her life!” And Malick called her a hypocrite for her stance.