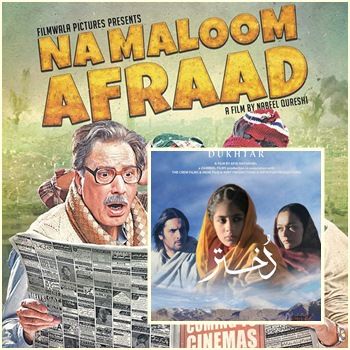 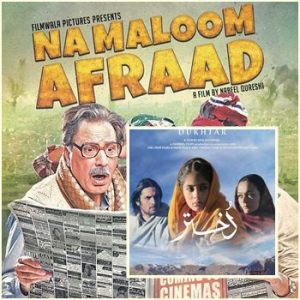 2 Pakistani movies, Dukhtar and Na Maloom Afraad are all set to be screened at the South Asian International Film Festival (SAIFF).

'Dukhtar' and 'Na Maloom Afraad' were both praised by critics and enjoyed by audiences. Both the films has broke all the records of Pakistan film History, the films immense popularity has reached to the global level, after its world premiere at the Toronto International Film Festival and nationwide release on September 18th 2014; it has now been selected by the Pakistani Academy Selection Committee for The 11th Annual South Asian International Film Festival will take place from November 17-23.

According to the Filmmaker Sharmeen Obaid-Chinoy “Dukhtar has set a new precedent in filmmaking in Pakistan. The film’s powerful narrative is met with equally strong visuals, which collectively showcase what Pakistani talent is all about.”

Last year the critically acclaimed Zinda Bhaag was nominated for Oscar and this time the real societal based issue of child marriage has been considered. The film has explicitly explores the prevailing issue of child marriage in Pakistan through the journey of a mother and her 10-year-old daughter. The story line and sober- realistic characters are simply remarkable. The brilliant actress the film has been commends for its attempt to diverge from the usual song-and-dance in Lollywood films.

“It’s so overwhelming to hear about this right after our world premiere in Toronto and during our theatrical release in Pakistan.” She added, “I extend my deep gratitude to the committee for their support and our audiences everywhere that have embraced us so warmly.” Afia Nathaniel said, SAIFF showcases films from South Asia (i.e. India, Pakistan, Sri Lanka, Bangladesh and Nepal) and also from within the Indian diaspora.

The festival will also exhibit Kanu Behl's Titli and Sudhish Kamath's X among others and various short films such as Atanu Mukherjee's The Gatekeeper and Sreemoyee Bhattacharya's Veil.