Saba Qamar’s New Pictures On Fire, Exposed Body While Swimming in a Pool

Sabahat Qamar Zaman, known professionally as Saba Qamar, is a Pakistani actress and television presenter. One of Pakistan's most popular and highest-paid celebrities, her roles have been credited as a significant departure from the traditional portrayal of women in Urdu television.

The leading actress of Akstan showbiz industry Saba Qamar is often active on social media, new pictures of the actress swimming in the swimming pool to get rid of the rising heat have gone viral, social media users seem to like the pictures very much.

According to the details, Saba Qamar, a well-known actress in Pakistan's film and drama industry, is often active on social media, sharing her photos and videos on Instagram to keep fans informed of her engagements. Demonstrating her skills, photos of the actress, who was tight-lipped with heat, went viral on social media. 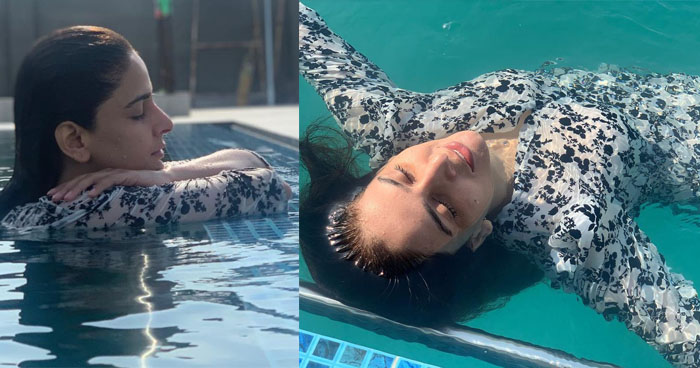 In these photos, Saba Qamar can be seen swimming in the swimming pool. These photos, which were shared 1 hour ago, have so far attracted more than 46,000 users. You see, the actress wrote 'Happy Sunday' in the caption of the photos.

It should be noted that earlier a video of the actress went viral which was about her new project. In the video, Saba Qamar can be seen dancing to the song of Medium Noor Jahan while the boy of the team is also present in this video.

The actress of the year is optimistic about the success of chart-topping projects while many people may have noticed that Saba is keeping a close eye on the creative script.

In this way, his dramas have also proved to be successful. Actress Saba Qamar will return to the screen with her new project 'Tumhare Hassan Ke Naam'.

Actress Iffat Omar Cried on the question, ‘Are you divorced?’