Saba Qamar’s Hindi Medium’s Trailer Is Out & Its Amazing

Irrfan Khan can be you. So can be Saba Qamar. Any parent who has gone through the experience of getting his or her child to a ‘good school’ will definitely empathise. As will those whose lack of English makes them feel left out. Because in our country, knowing English is akin to being intelligent. Hindi Medium is a take on all such people who feel they are a notch apart because they know English.

And what a funny, hilarious and emotional take it is! Hindi Medium trailer finds Irrfan Khan in elements. He deadpans as he drops one hilarious line after another and the fun part is, there is a message embedded in every single of those laughter riots. 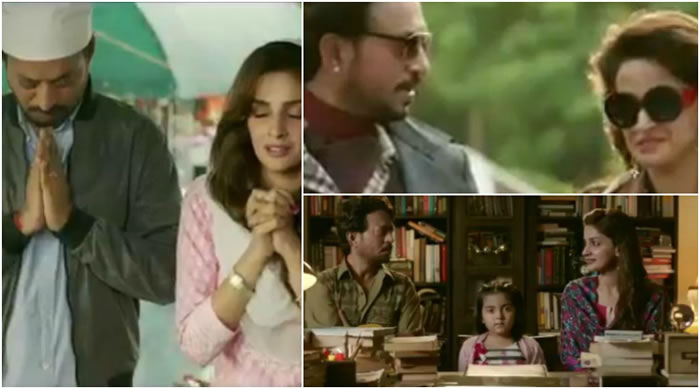 Set to the original track by Sukhbir, Ishq Tera Tadpaave, the trailer is about a couple who is trying hard to get their daughter admitted to a good English school. According to Irrfan’s wife (played by Pakistani beautiful actor Saba Qamar), English is not a language but a class and if not them, at least their daughter should be a part of that class. The film showcases how difficult it is to get your child admitted to schools which can easily double up as luxury hotels. The family goes for a makeover but there is no admission in sight. Their Plan B is to get their girl admitted through ‘gareeb quota’, for which they turn poor. Now that brings in its wake everything that poverty entails, including mosquitoes and dengue.

Check Out: Mahira Khan Sizzles On the Latest Edition of Grazia