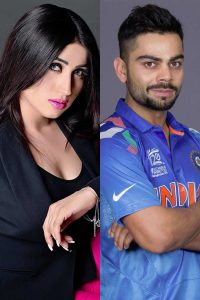 Qandeel Baloch made a steamy video where she bluntly expresses her desire to Indian cricket star Virat Kohli.

Qandeel Baloch has come up with a rather bold overture, urging Indian batsman Virat Kohli to pay attention to her rather than Anushka Sharma.

Scroll down for video:

After enjoying a very close and intimate relationship, Anushka Sharma and Virat Kohli were now at crossroads. There were strong rumors that Kohli and Anushka had almost broken up and the intimacy had vanished. And now Pakistan’s Qandeel Baloch, well known for her rather objectionable and controversial Facebook video posts, has asked sought the attention of the Indian star batsman to give up his friendship with Anushka Sharma and instead opt for friendship with her!

Yes, in her latest video, Baloch says,”Oh my God, Virat Kohli is so charming. Please Kohli, leave Anushka for me!”

Will Virat pay heed to the words of Qandeel Baloch and opt for the Pakistani lass and part ways with Anushka?