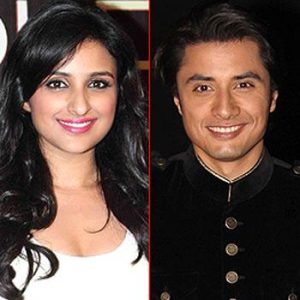 Parineeti Chopra recently heard saying "Ali is being known for his singing and acting, knowing him as a person is huge privilege for me.

Parineeti Chopra (born 22 October 1988) is an Indian actress who was introduced to Bollywood by director Maneesh Sharma. In 2011, Parineeti made her debut in Maneesh Sharma's ‘Ladies Vs Ricky Bahl’ alongside Ranveer Singh and Anushka Sharma in the main lead.

Recently, her film ‘Dawate Ishq’ was a well liked Bollywood flick against Aditya Roy Kapoor. Nowadays, she is busy in the shooting of her upcoming movie ‘ Kill Dil’. The film starring Ranveer Singh, Ali Zafar and Govinda in male leads whereas Parineeti Chopra is the female star lead for this movie.

Ali Zafar is also playing a key role in this movie. As we know that Ali is one actor who has always been in the news for all the good reasons. Wherever this artist goes, he preaches peace, love, friendship and leaves huge amounts of goodwill behind.

Ali Zafar has earned immense popularity in his brief 5 Indian movies, Zafar seems to have found place in the hearts of his upcoming film Kill Dil's cast too.

Parineeti Chopra was recently heard saying "Everybody knows the singer and actor Ali but I had the privilege to know him as a person during Kill Dil. He is the coolest and funniest guy to be with; I like him because of his positive approach and no-nonsense attitude. He is the only one I can sing all day with and who won’t tell me to keep quiet.