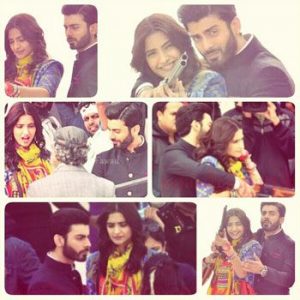 Fawad Khan, the super talented actor, model and singer of our country is working in a film ‘Khoobsorat’ across the border in India. Forthcoming film ‘Khoobsurat’, is an official remake of 1980 classic romantic-comedy with huge starcast including Rakesh Roshan, Rekha, Ashok Kumar, Keshto Mukherjee and Dina Pathak.

Right now, Fawad is busy shooting for his upcoming project, causing him absent from all Pakistani productions to complete the shooting of this film. According to the latest update, Khoobsurat will be released on 19th September 2014. Fawad is widely popular and followed in Pakistan, so it will be interesting to see the response of this film in India i.e. the actual market the film is made for.