HUM Awards as known for creating a legacy of entertainment with indomitable efforts triaged its 5TH HUM Awards 2017.

An ensemble of stalwarts from different allied fields, ranging from broadcast community to fashion fraternity. From veteran musicians to emerging actors and from visionary directors to style gurus, all were there to grace the most stylized and grand event witnessed. 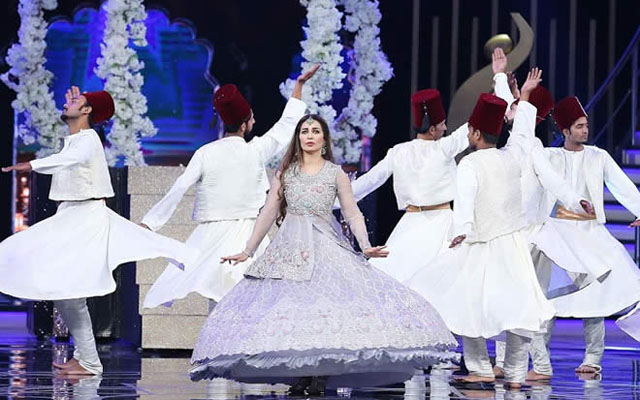 Bestowed by HUM Television Entertainment with a success of four HUM Awards in credit with excellence in television programming, the most beguiling cogitated golden statue of Pakistan was hosted in Lahore after a triumphant show in Karachi last year.

To amply employ a cliché, we’ve seen HUM Awards to grow from a hatchling to a swan. Who knew the off-centre thought of celebrating Pakistan Drama industry by Ms. Sultana Siddiqui (President HUM Network) will be here to stay and sustain. 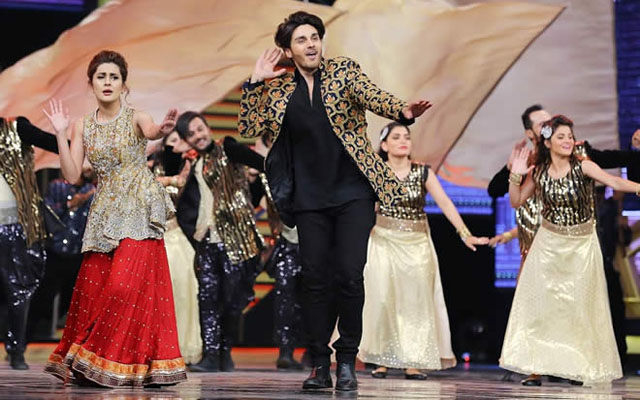 Television’s biggest stars headed over to Expo Center Lahore for the 5th HUM Awards 2017. Vaticinators near and far have made their best guesses but HUM Awards is also known for its fair share of snubs and surprises. You can always expect surprises at this event but knowing where to expect them is the trick. This year they came early and often.

5th PEL HUM Awards saw an amazing presentation of Pakistan’s brightest faces that will hold sway over the next few decades, the people who are destined to shape the Pakistan Entertainment Industry – culmination of mega celebration and performances that brings Pakistani drama to the world. 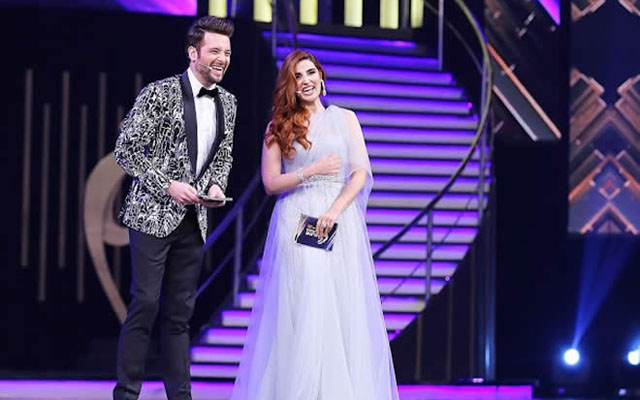 The quintessential red carpet of any happening affair is undoubtedly an icing on a multi-layered cake and the pizzazz photographs the cherry on top. The prepossessing celebrities walked down the red carpet in their best with a glitter all over the place interlaced with elegance and glamour; staggering fashion being the order of the day.

It won’t be erroneous to allude to the opulent stage of HUM Awards set up to the finesse in the history of Pakistan award events with attention to every detail and the singular graphical presentation. The show stopping décor and cascading crystal curtains didn’t fail an inch to amaze the audience and add impact to this event. Fugitively – the one of the kind, look found in the vintage film musicals. 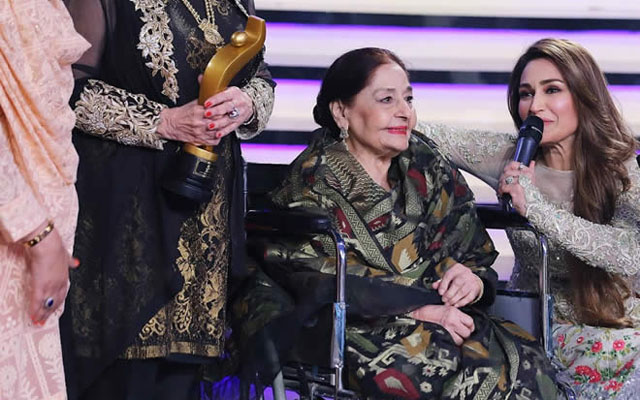 How astute of the show director to keep the rundown of the show by hitting the trail with the farce segment to draw the heed of the audience and that too with the maestro Yasir Hussain, who knows his business quite too well and is here to stay in this show business with sustainability for years.

It would be unjust not to mention the impeccability of the hosts of the event here who have done scrupulously for themselves in the industry in just a span of few years but with a dedication worth the mention. It is because of Mikaal’s good looks and his charismatic calm personality that he bagged the hosting of HUM Awards the third time and his on-stage confidence and great sense of humor being the order of the day alongside the wonderful addition to the Pakistan Entertainment Industry, Hareem Farooq the stunning gal next door with dense meaningful eyes, unfathomable eye brows and hair casting down through her shoulders. 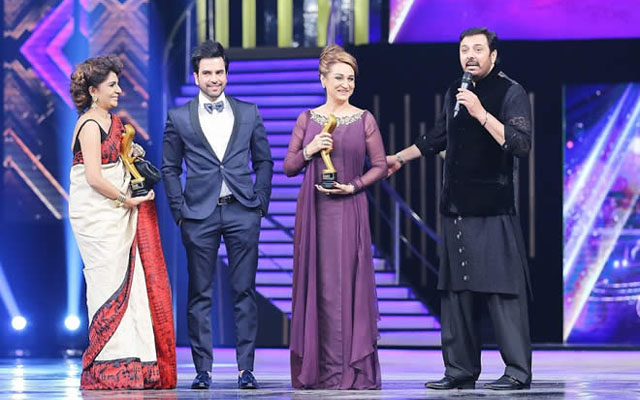 OST’s matter a lot in the overall exposition of the serial being aired on television and is commonly discerned by the viewers to a great degree and Mann Mayal successfully earned its award for the Best OST presented by Nadia Hussain and Feroz Khan.

Remembering the gone; 5th HUM Style Awards paid a tribute to Junaid Jamshed. Headed to a somber note with an ode to late Junaid Jamshed (who passed away in a tragic plane crash) by his sons and Salman Ahmed on “Junoon Se” was a gist that yawped that his legacy will live on. Junaid Jamshed undoubtedly helped revive the Pakistani pop music with his soothing voice and rose fame across the world. His love for the country was so big that it has given us an anthem like ‘Dil Dil Pakistan’, which will live on to be an inspiration for every Pakistani. 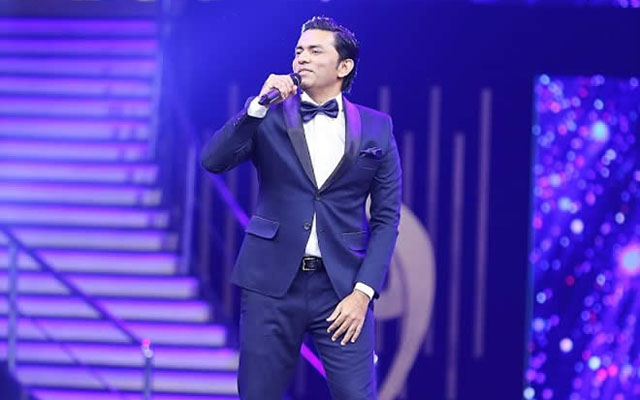 Where actor Shahroze Sabzwari is considered regular when it comes to performing, the actress Sehrish Khan was a well structured surprise to the audience, for how well this lady shakes the leg. 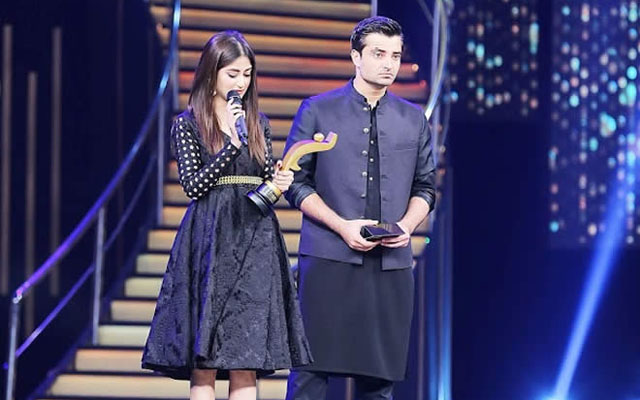 Glitz, Glamour and recognizing talent is one of the centerpieces of HUM Awards, the Best New Sensation Award went down to Kubra Khan while the Best Child star Award to Arisha a.k.a Zebo was like a cherry on top. The Best Telefilm award was bagged by Chaman Ara.

It was a fantastic night of racy performers, some of them a lot of fun like Mehwish Hayat’s performance – it was by far most rousing stage performance witnessed that evening. However, the most dhuaandaar (steamy) performance of Finale belonged to Reema Khan who set the stage on fire as she arrived to move on the songs so gracefully that the crowd went “Woah”! Where it was a long wait to Reema’s performance, the highlight remains how effortlessly she performed with minor pre rehearsals. She whirled and twirled – those jhatkas and thumkas! “The modernity of yesterday is the tradition of today, and the modernity of today will be tradition tomorrow.” These lines by Jose Andres sum up all too perfectly the annual tradition of HUM Network of recognizing the veterans by Life Time Achieving Award Category presented by Ms. Sultana Siddiqui. It was indeed the deserving Farida Khanum to have had given appreciation of her work and efforts for Pakistan Entertainment Industry.

Where every award show in the country tries to bring the solitary element to their show, HUM Awards not bashful, presented the most soulful experience for the audience with the midas touch of this tender generation featuring the Musical Ensemble with Sajjad Ali’s live performance for the first time along with the sensational Ali Sethi, Momina Mustehsan and Asim Azhar. The spot light of the show metastasized with the segment. Most Impactful Character in Serial was presented by the talented Junaid Khan, Iffat Omer to Bushra Ansari for Udaari and Nouman Ejaz for Sang-e-Mar mar and Mustafa Afridi picked the trophy for the Best Writer Drama Serial for his work in Sang-e-Mar mar. Best Director Drama Serial was presented by to Muhammmad Ehtisham Uddin for Udaari.

SIR KALAM Successful run on May 1st in Karachi