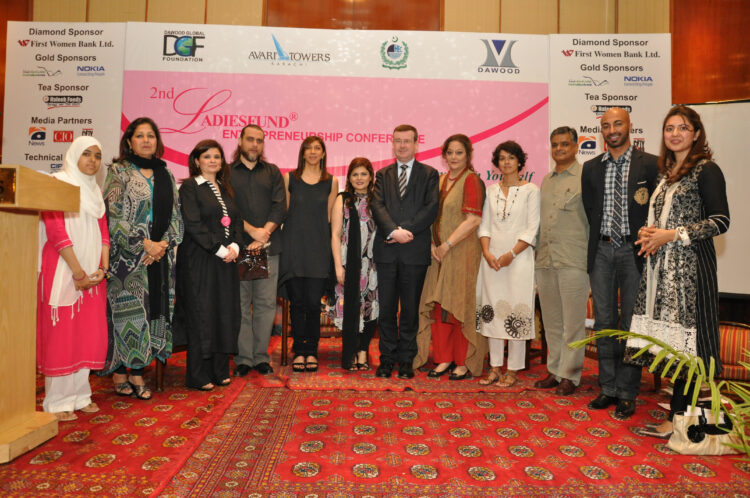 LADIESFUND was established in 2007 as an initiative to provide financial security to women and to promote and train women entrepreneurs based on the economic and social aspects of the local communities, with respect to greater women participation in the workforce. Funds raised from LEC 2011 are all audited by Ernst Young Ford Rhodes Sidat Hyder and go toward LADIESFUND Fellowships & Scholarships as well as women development initiatives.DGF teamed up with Higher Education Commission, Avari Group and Dawood Capital Management Ltd., as well as over 60 partners, sponsors and supporters to showcase seven of our country’s best entrepreneurs including Hyatt. The audience was diverse and consisted of VIPS, top entrepreneurs budding entrepreneurs, journalists and enthusiastic university students.

The conference was moderated by Sidra Iqbal and started with a recitation from Talat Hashimi followed by a welcome address by Tara Uzra Dawood who spoke about the selection of an A-team of male and female panelists to inspire and interact with the audience.  She informed that LADIESFUND was the nominating partner for Harvard Business School and All World’s Pakistan 100, USAID and had been invited to nominate women for Cherie Blair and Google Foundation’s virtual mentorship program, as well as to help shape the development of a Women’s Commonwealth Business Council (CBC).

This was followed by a speech from British Deputy High Commissioner Francis Campbell, who was the Chief Guest, on the importance of entrepreneurship in Pakistan and how much it will help to boost our economy. The Chest Guest also announced he would be personally and proudly informing the Queen about LADIESFUND, LEC 2011 and the invitation to help shape a Women’s CBC.

Rohail Hyatt, the powerhouse behind the famous Coke Studio, to everyone’s amazement, joined the first panel that included Zeenat Saeed Ahmed (Taneez), Ayaz Khan (Okra) and Wajeeha Malik (Olive soap). They expertly answered questions about their journeys to becoming and entrepreneurs and the current realities of this field.

In answering an audience member’s question on how to cope with the loss of friends that are jealous of one’s success, Hyatt wisely spoke about the loss of certain college friends when Vital Signs became successful, a national leading pop band for a decade. He shared some profound insight, stating, “A little darkness cannot affect light but a little light can completely change darkness.”

The second panel comprised of Naheed Mashooqullah (architect), Hassan Sheheryar Yasin (designer), and Naila Naqvi (Pie In The Sky, Chatterbox). They shared the inside scoop on how their brands tipped to become the best in their industries despite facing the adversities that all Pakistani entrepreneurs face concerning electricity, human resources etc. They discussed businesses expansions and whether expanding through other people platforms or through one’s own is a better option. They then answered those questions the audience had been burning to ask in a Q & A session that followed.

Rohail is a renowned personality for his multitalented works in the promotion of Art in Pakistan. In Vital Signs, he was a band member, producer, songwriter, guitarist and keyboardist. ‘Dil Dil Pakistan’, the band’s first hit was voted the 3rd most popular song in the world by a poll carried out by BBC world. He produced an album featuring Rahat Fateh Ali Khan, nephew of the legendary Ustaad Nusrat Fateh Ali Khan, in India in 2003. This revolutionary singer became quickly immersed into mainstream Bollywood thanks to Hyatt’s insight and diligence. In the past too, Rohail made his mark through Shoaib Mansoor’s milestone film Khuday Kay Liay (2007).

He has given back to his community tremendously by launching Coke Studio, and giving Pakistan a tasteful international face for it’s authentic and diverse musical talents, having received critical acclaim all over the world.

The Art of … Events managed this extremely punctual and well-attended event with technical partnership from CIPE, tea sponsorship by Haleeb Foods and public relations by The Art of … Public Relations.