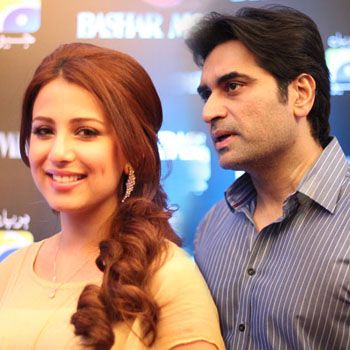 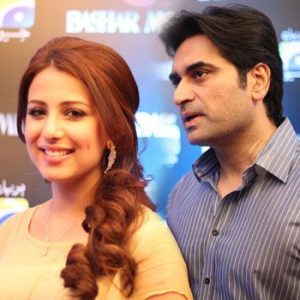 Ushna shah is Hamayunâ€™s latest Crush, as Humayun reached at the venue of â€œBashar Momin-s opening ceremony without host invitation.

Ushna shah beauty has captured the hearts of many. Her exceptional acting skills and charming personality has brought her immense popularity. The gorgeous is playing a lead role in Sensational Geo Drama serial “Bashar Momin”. Reportedly, the ladies man, Hamayun Saeed got a crush on Ushna shah. Yes its True!. If you are wondering about Ayesha Khan, then it’s an old story now. One this news is out in media, Humayun got flooded with criticizing messages from his fans.

The newspapers, websites and social networking sites are full of rumors regarding Hamayun Saeed interest in the newcomer Ushna Shah. On the launch of Bashr Momin Hamayun Saeed made a special guest appearance just to see Ushna. After   the first episode of “Bashar Momin” went on air, people criticized actress Ushna Shah saying that Ushna would have been a much better actress if she had taken interest in her acting instead of the actor.

It is also reported that Ushna Shah and Humayun Saeed have seen together at quite a lot of places. Well, Ushna has a different story to tell, according to her picture with Humayun saeed at drama launch is being photoshopped, infact she made a picture with Sami Khan.

Whether it’s a fact or rumor, but Ushna has to be really careful in saving her repute as she is at the peak of her career. We wish her best of luck in her acting career.