9 Fresh Ways to Wear A Suit

Buy a tuxedo suit in new jersey is a lot like buying life insurance: it’s an expensive purchase, but one that ultimately pays dividends.

Come to think of it, given that a suit can get you out of almost any sartorial pickle, it practically is life insurance. And just as it’s wise to get the most out of life, it’s only economical to want to get as much mileage out of your tailoring as possible. With that in mind, take a look at these nine modern ways you can wear a suit for the season ahead. 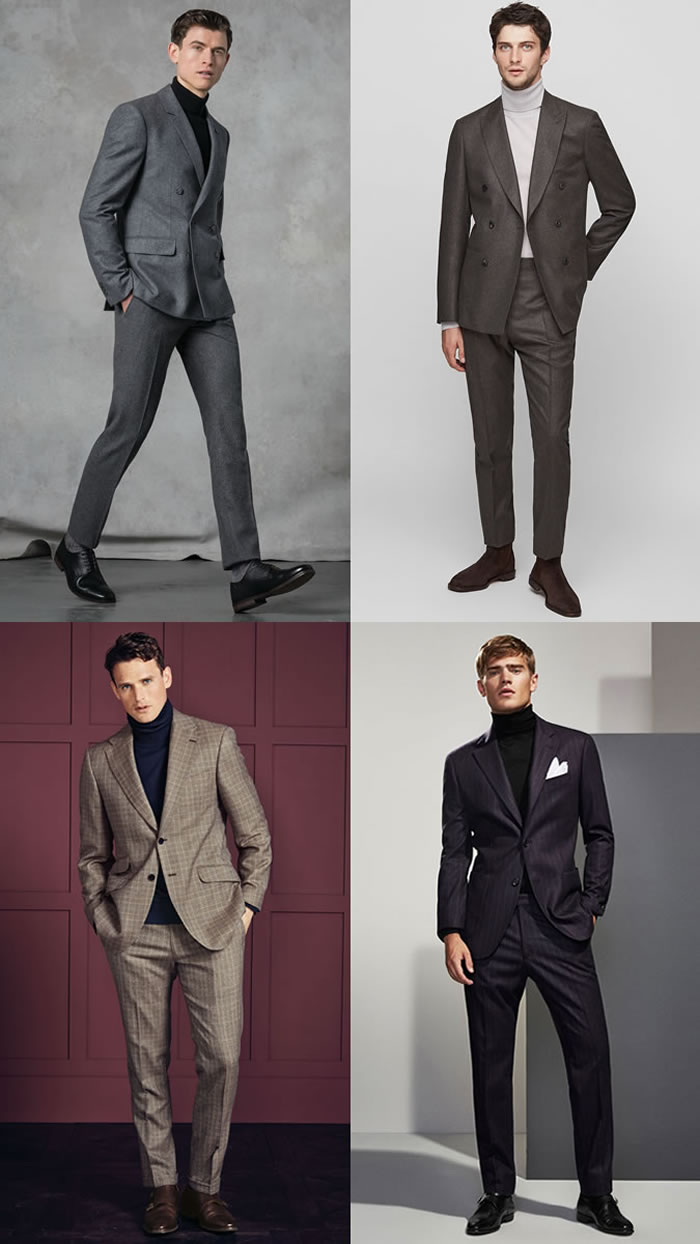 It’s time to face facts; summer is on the out and whatever follows next (you can never be too sure these days) is on the in. But that doesn’t mean simply bundling back up with little care for your look. If the aim is to smarten up your transitional wardrobe for the changeable autumn months, consider layering a lightweight roll neck under your suit jacket. Prioritise temperature-regulating fabrics such as merino wool in a subtle shade that complements your two-piece (a waistcoat is overkill here) to ensure you remain cool and comfortable. 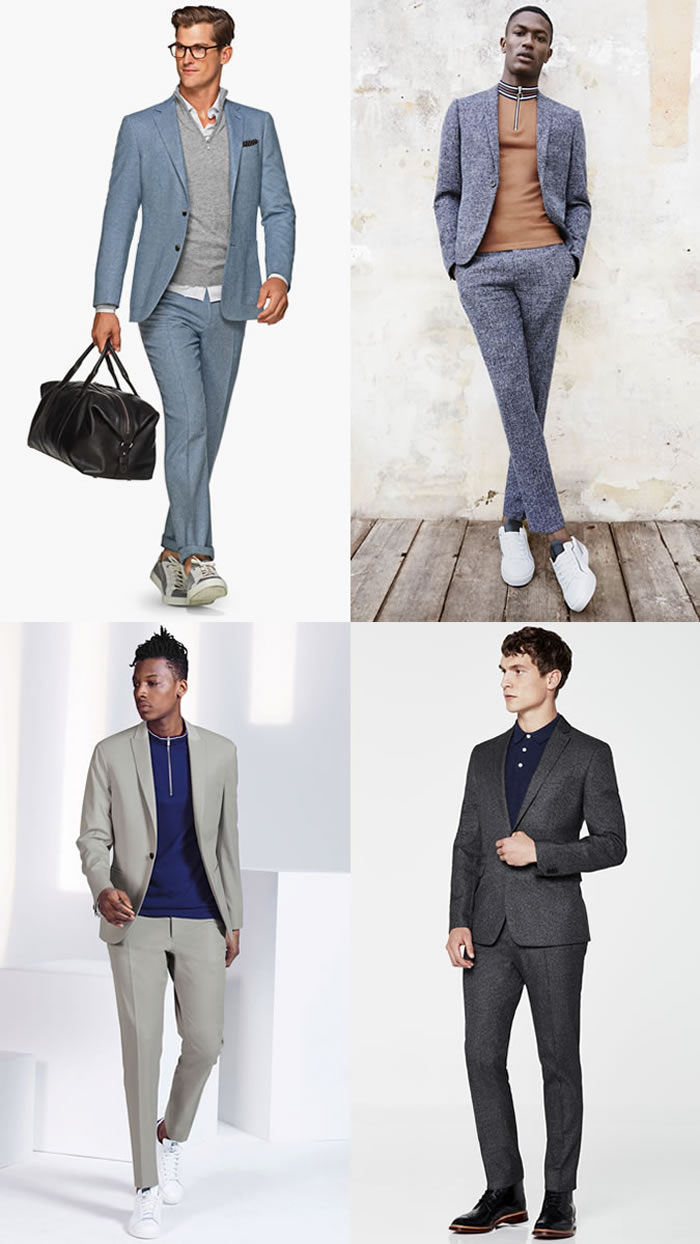 On paper, sportswear and tailoring sounds about as harmonious as Danny Dyer at the Henley Regatta. Thanks to the likes of Burberry and Prada however, it’s slowly become a love affair of Shakespearean scope – but one that can turn into a tragedy if you don’t follow the rules. The best approach is to layer. Slide a well-fitting track jacket – preferably from a non-football-hooligan brand – underneath your blazer for a new take on autumnal nine-to-five. For the brave, experiment with plain a sweatshirt or zip-neck sweater in the same manner. “Plain” being the key word, here. No matter how great your new Fila sweat is, it’ll quickly tarnish Savile Row tailoring. 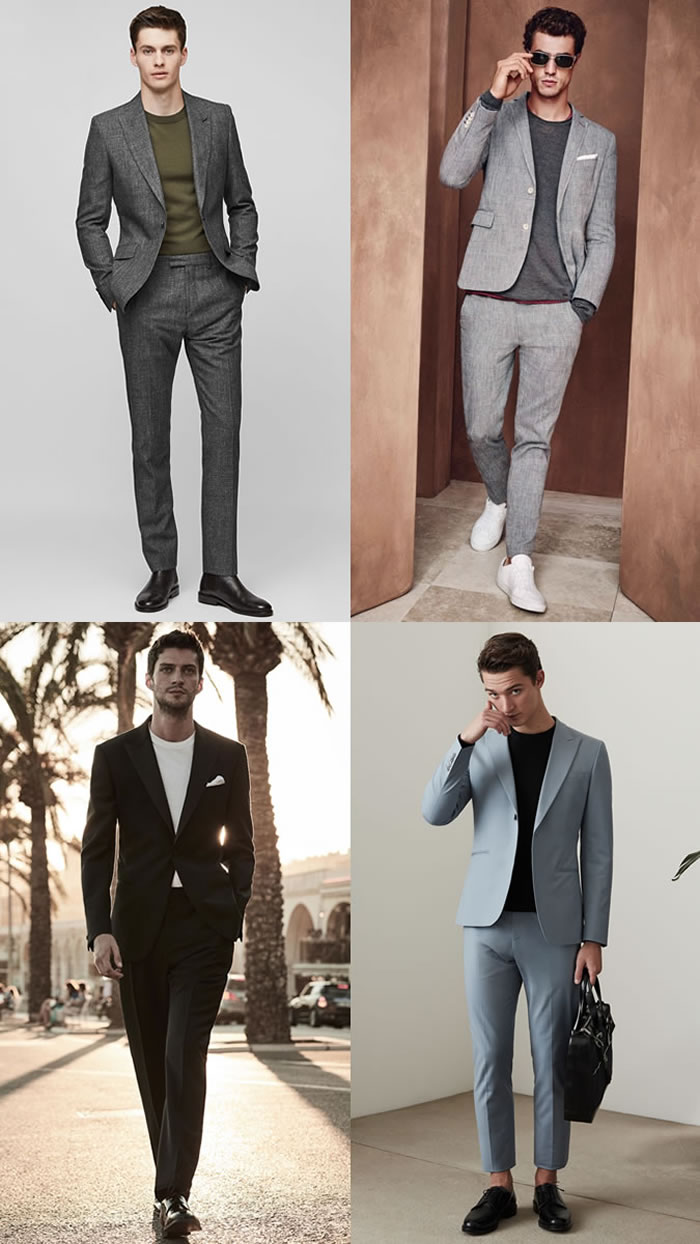 Once the uniform of spice boys at every crap provincial nightclub known to man, a suit with a T-shirt is now a bona fide menswear combo. Yet despite the big comeback, there are still guidelines to follow – lest you play the 2am desperado in a deep V and boxy pinstripes.

Give It The Boot 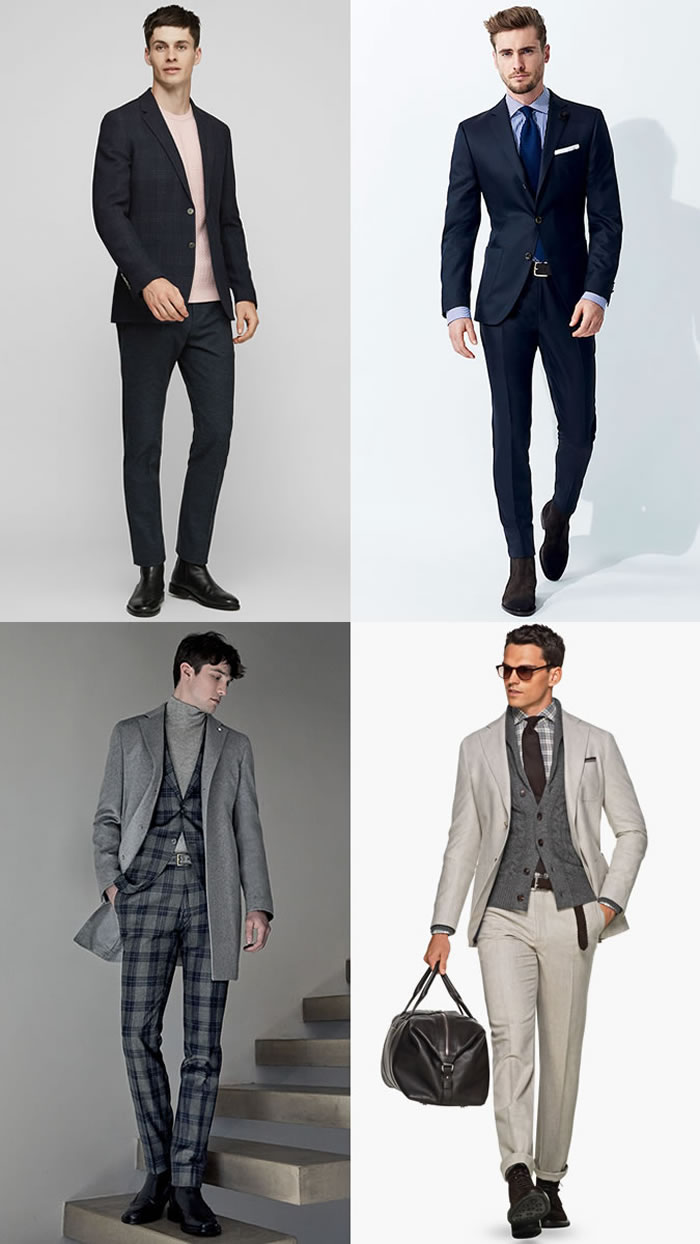 Before anyone screams “Pete Doherty’, know that a suit with boots can exist outside a Babyshambles album cover. Or, at the very least, harks back to a cooler time for rock music. By channelling your inner mod – the king of cool circa 1963 Chelsea boots can underpin a slimline suit, particularly when combined with roll necks, skinny ties and the like. Alternatively, style your look even earlier, with a pair of Victorian-style lace-up boots for a sharp anchor to more classic tailoring. 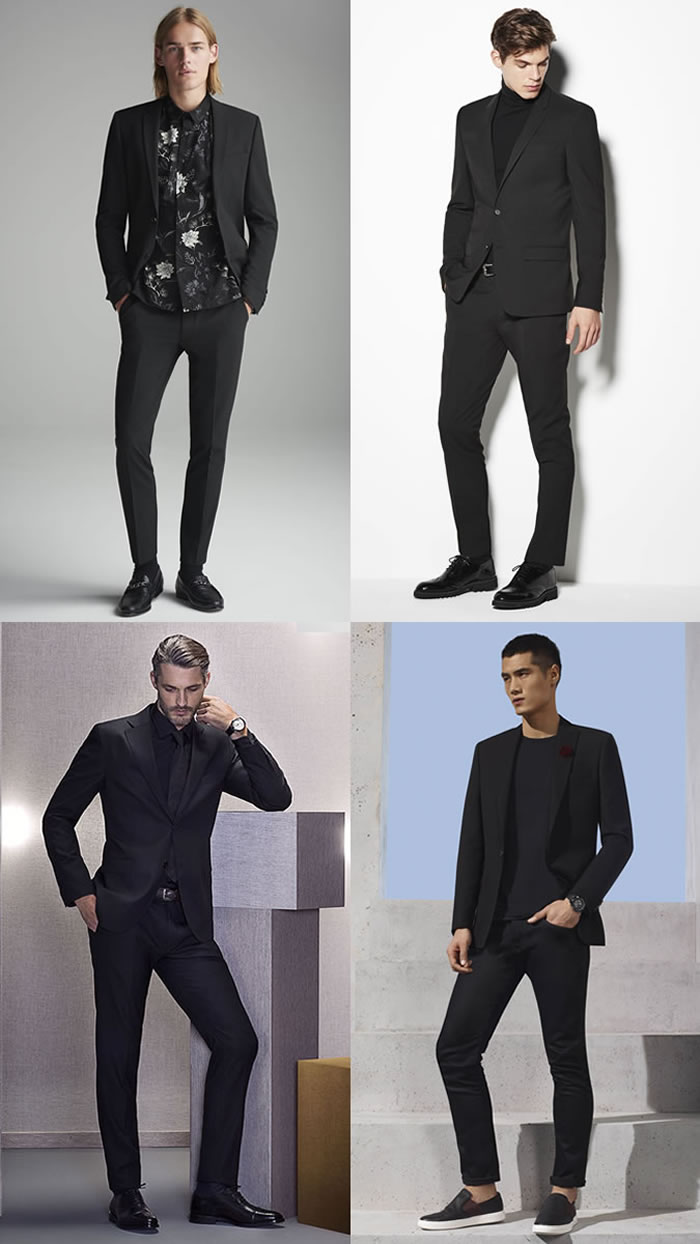 Despite all-black-everything’s refusal to die, wearing a black shirt or tee with a suit of the same colour is still swerved by many guys for fear of looking a bit mobster. We’re here to silence the haters (not like that) and put our full weight behind the look, because suiting up in the dark stuff can come off seriously slick and sophisticated. The important thing here (aside from fit) is to ensure whatever you layer under your jacket is the same shade of black. Any variation in tone will make whichever item is lighter appear as though it has faded. 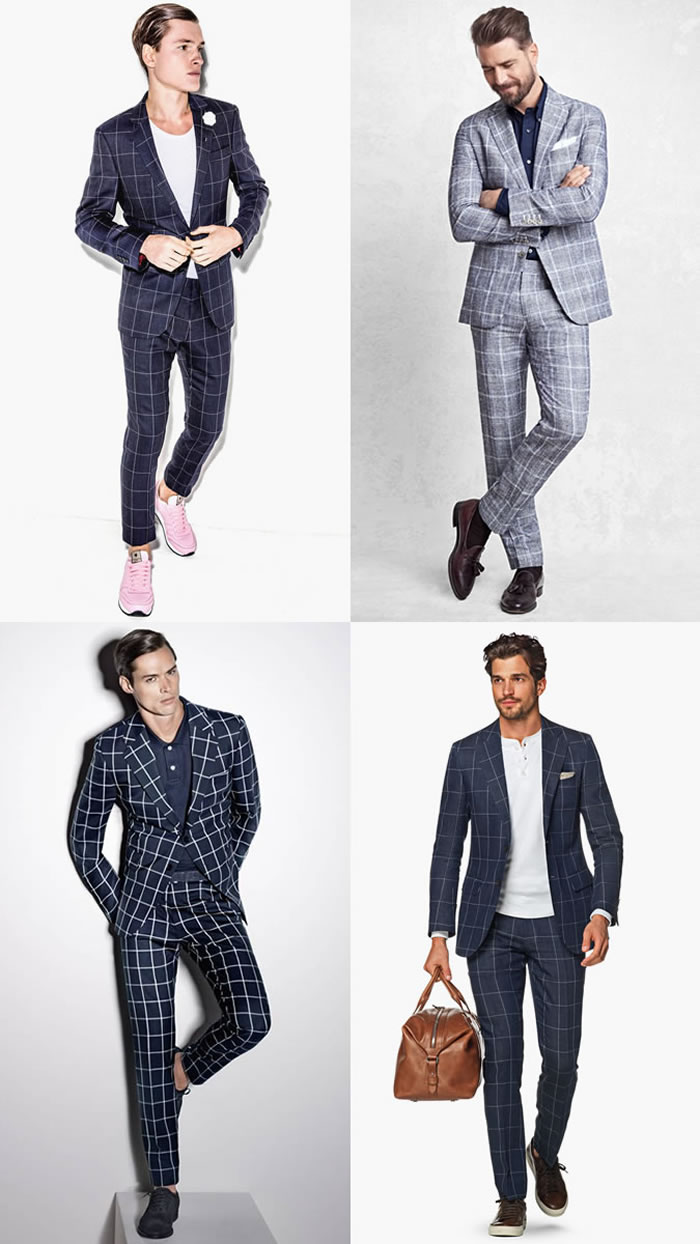 A check suit has the ability to turbo-charge your formal wardrobe (and who doesn’t want that?). But patterned tailoring, by its eye-catching nature, can be notoriously difficult to pull off. There are plenty of subtle checks available for the less sartorially adventurous, but when it comes to more noticeable squares, try keeping things simple. Swapping the customary shirt and tie combination for casual wardrobe basics (think a neutral crew neck T-shirt or Henley top) allows the suit to take on a reassuringly minimal look – ideal for a wedding that doesn’t have a strict dress code. 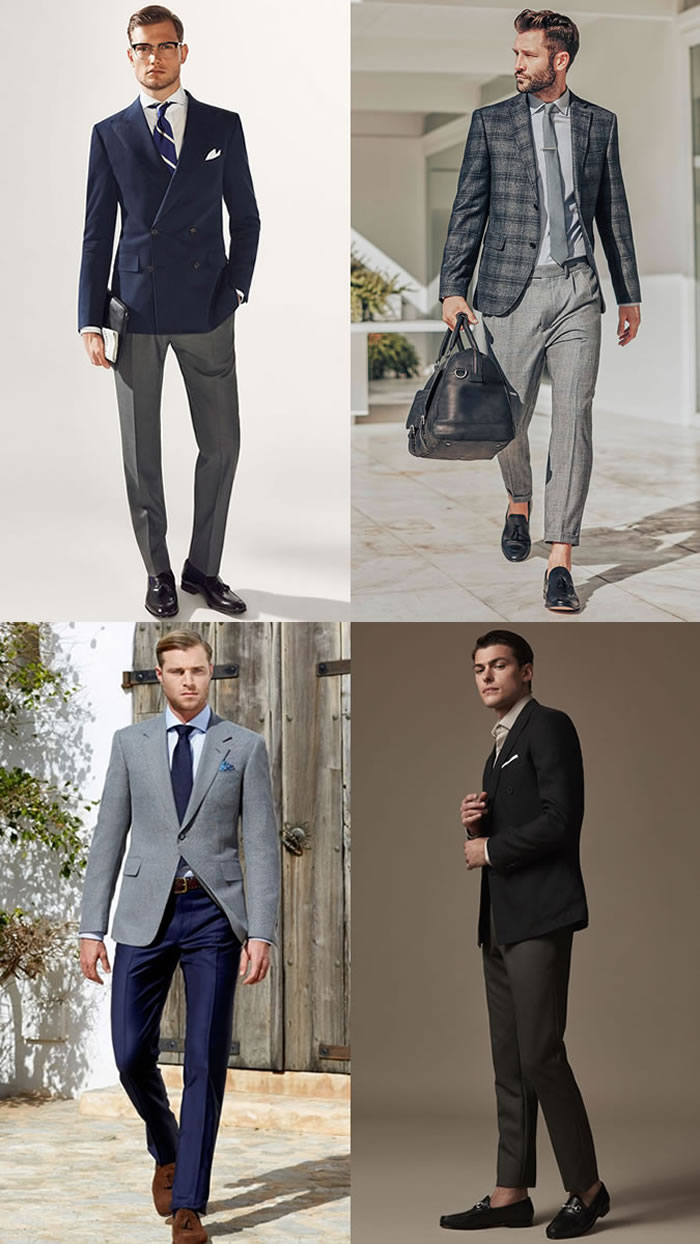 Old-school tailoring rules died with David Cameron’s premiership. So, throw the rulebook to the wall with some splintered separates. Sounds like an accident and emergency prognosis, actually a legitimate menswear technique. Combining jackets and trousers from different suits gives you almost endless options to mix ‘n’ match, resulting in a memorable look without falling foul of the dress code. If you’re not confident with colour matching, opt for tonal shades, and if there’s a pattern on top, your bottoms should be neutral. Oh, and only the Chipping Norton set consider red trousers with navy blazers to be cool. 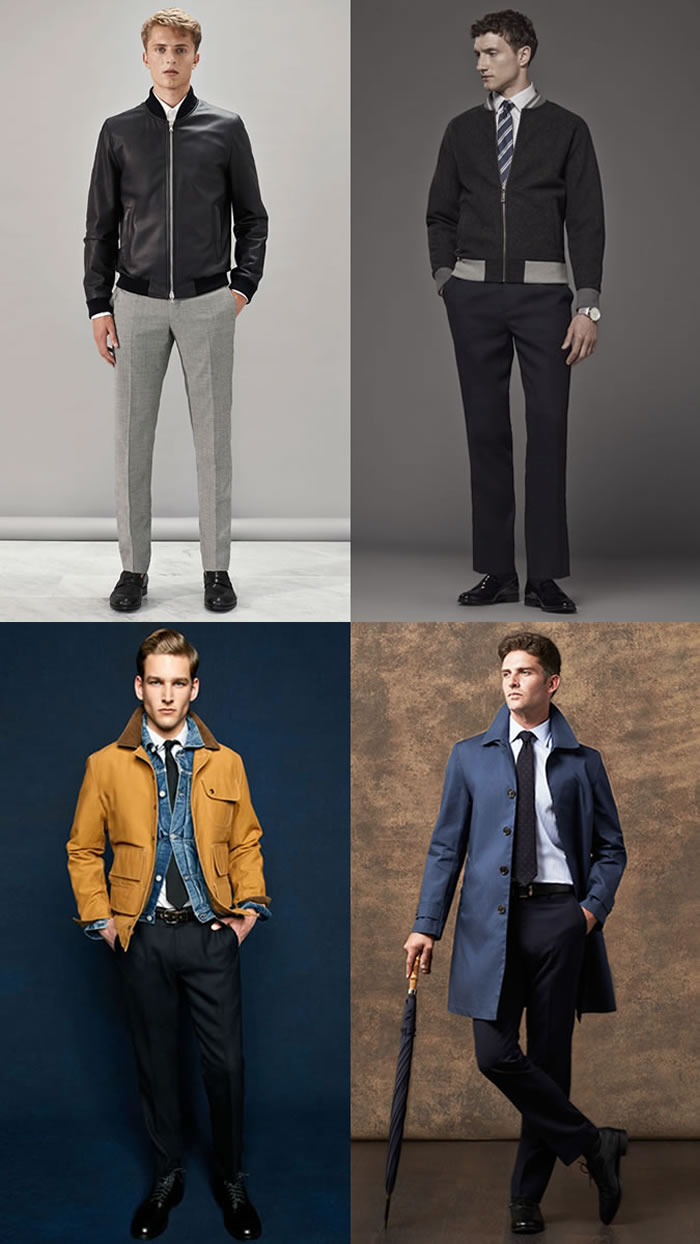 The idea of separating your suits may be nothing new, but switching your blazer for a piece of outerwear probably is. Ditching the suit jacket in favour of a leather biker or a field jacket in nubuck or waxed cotton channels an effortlessly cool rockabilly vibe, and is a smart choice for men who want to bring an edge to their formalwear. It’s a look we’ve seen nailed time and time again by the likes of Justin Theroux and Ewan McGregor. Just make sure the setting is casual enough for a solo shirt and tie combination to fly once the jacket is off (or risk overheating).

Give It A Kick 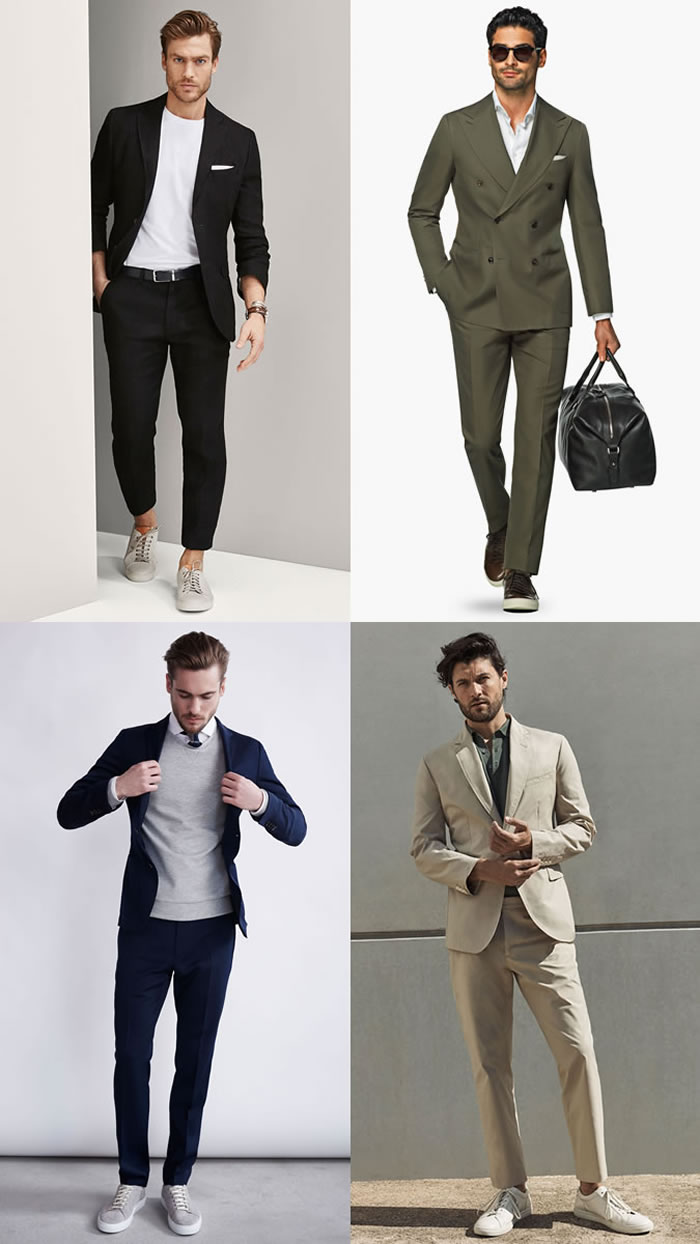 Done wrong (i.e. with neon green runners best saved for the gym) wearing casual footwear with a suit can make it look as though you’re only one Porsche away from a midlife crisis. Yet, done properly, swapping smart shoes for a pair of sneakers looks extremely contemporary and is a perfect way to switch from on-the-clock to after-hours. The key is to pick a ‘grown-up’ pair: minimal, neutral, preferably leather, and above all else, clean.

Most Effective Ways For Men To Remove Body Hair

Drama Actress is Heading For Divorce After 8 Years of Marriage