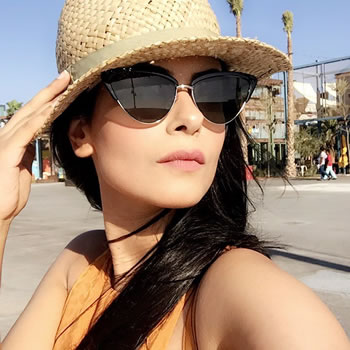 Amar Khan is a Pakistani television actress, director and writer. She has played a role of Neelofur (witch) in 2018 super natural series Belapur Ki Dayan. She further appeared in a leading roles in Ghughi and Dil-e-Bereham. Khan made her writing debut with 2017 short film Chashm-e-Num.

Amar Khan is a Pakistani television actress, director and writer. In the 2018 television drama Belapur Ki Dayan, she plays Neelofur, a witch spirit who returns from the afterlife to seek revenge on those who caused her death. The serial ran for 20 episodes and aired weekly. She worked alongside Adnan Siddiqui, Sarah Khan and Irfan Khoosat in the series. The serial also earned her nomination for Best Emerging Talent at Lux Style Awards.

She later appeared in TV One's Ghughi in which she played a Hindu girl who falls in love with a Muslim boy played by Adnan Siddiqui. The series was based on Amrita Pritam's novel Pinjar. Maria Shirazi of The News International wrote, “In a short span of time, Khan has proved her versatility”. In the same year, she made episodic appearance in anthology drama Ustani Jee. She later appeared as Ayeza in Sadia Jabbar's Dil-e-Bereham opposite Wahaj Ali.