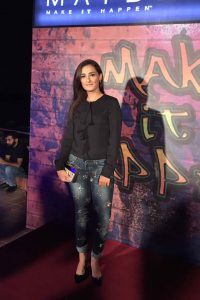 Following the launch of the Maker Women celebration movement with the release of anthem “Humsa Ho Tou Samnay” in Pakistan, Global trend setting brand, Maybelline New York held a soirée in Karachi to celebrate women who make It happen, hosted by the brand and their spokesperson, celebrity Ayesha Omar.

“Humsa Ho Tou Samnay Aye” celebrates women and the strength that they stand for; ‘Maker Women’ who are the heroes of their own lives and who Make IT Happen every day. The video features Actor and Maybelline New York brand ambassador Ayesha Omar, musician Zoe Viccaji, artist Naveen Shakil, MMA fighter Sarah Tareen, story teller AlinaEhtesham and unfolds against the soulful voice of maestro Ali Sethi.

For Maybelline, a Maker Woman is someone who wakes up every morning and walks out into the world like it’s her own. She owns it. She faces challenges by standing up and making her voice heard. She embraces life and is proud of her individuality. She is bold, fierce and unstoppable. Above all, she believes in her ability to Make It Happen. She is a movement.

Synonymous with its inspiration, the women in the brand film are MAKERS of their own destiny; women who each day, seize and embrace their journey; that create their journey.