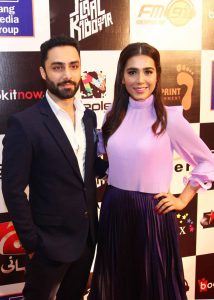 Nehr Ghar Films hosted a screening to launch the official trailer for the upcoming crime-thriller Laal Kabootar at Nueplex Cinemas in Karachi. The unveiling ceremony turned out to be start studded affair, marking a grand opening to the trailer’s release in cinemas across the nation.

The two-minute trailer of Laal Kabootar is the first red band trailer [for mature audiences only] for a feature film in Pakistan and has all the elements of thrill and excitement to take the cinema goers to a rollercoaster ride featuring Ahmed Ali Akbar as Adeel Nawaz – a hustling taxi-driver, looking for a way out of Karachi. But with his back against the wall, Adeel has some hard choices to make. Aliya Malik, played by the alluring Mansha Pasha, is strong-headed to the point of being stubborn, however when her world turns upside down in a series of incidents, she chooses to put up a fight even though her life is on the line. With its action-packed sequences and blinding pace, the official trailer of the upcoming movie will take the audiences into the unpredictable world of Laal Kabootar, leaving them wanting more!

The trailer launch event for Laal Kabootar was attended by the talented cast including Ahmed Ali Akbar, Mansha Pasha, Ali Kazmi and Salim Mairaj. The young Harvard graduates and producers of the film, Hania and Kamil Chima, along with the award-winning director Kamal Khan and DoP Mo Azmai, were also present at the auspicious occasion. Apart from the team of Laal Kabootar many prestigious guests like Jibran Nasir, Zoe Viccaji, Noor Hassan, Saqib Malik, Adnan Shah Tipu, Angie Marshall, Syed Yorguc Tipu Sharif, Zhalay Sarhadi, Dino Ali, Nazneen Tariq and Ahmer Naqvi along with members of the esteemed press were also in attendance. The event was managed by Take II with PR by Lotus.