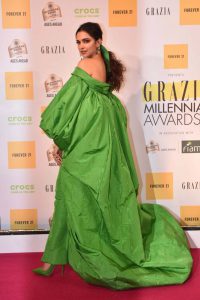 The recently held Grazia Millennial Awards proved to be a star – studded event as numerous celebrities from the Bollywood film industry as well as the television industry graced the event with their presence.

The celebs have put their most fashionable foot forward at the mega event and are definitely setting some serious fashion goals for us! Most of the fans eagerly wait for such award seasons in order to get a glimpse of their favourite celebrities walking down the red carpet in style.