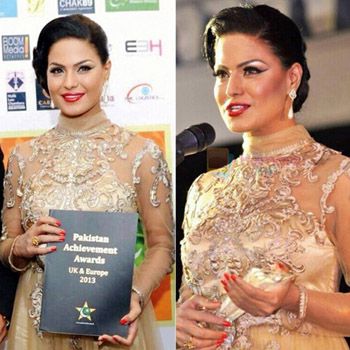 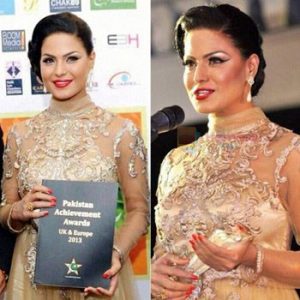 The â€œMost Successful Pakistani Entertainer on the Globeâ€ - Veena Malik. Despite of her death threats on the award ceremony she made courageous move to attend the award function.

The contentious actress Veena Malik is a multitalented item girl and is no stranger to controversy. She got her first big break through Bigg Boss, and then to her infamous magazine cover, she has steadily managed to keep herself alive in the news, in simple words she is the Miley Cyrus of Pakistan. She recently released Indian movie Supermodel, a thriller featured her ex-boyfriend and Big Boss co-star Ashmit Patel as her leading man, Veena Malik crackles on screen and will unquestionably raise a few more eyebrows.

The whole past year turned out to be successful for her and she has been celebrating eventful months, recently as she was invited to the United Kingdom to receive an award for being the “Most Successful Pakistani Entertainer on the Globe”. Regrettably, her cheerfulness could not last for long as she got the news of her death threats on the ceremony.

But the daring women did have her hands down she decided to go to ceremony after consulting with her international PR agencies. To wish the honor of the organizing committee and arrived at the award function and stayed on stage for 15 minutes and for that 10 guards were available on the venue for her security.

Veena informed “On the eve of the awards, as I landed in the UK, I was told by a member of the organizing committee that they have received two death threats by text message, regarding me.” She had no idea for which so called fanatic groups they belong to and had made some not-so-subtle hints about which fanatics she speculates are involved.

"It is a weird thing, and I get a bizarre and an unhappy feeling inside. I wish I could move around like a free person, but this is the price one pays for being a celebrity.” She further added. But on lighter note she concluded by saying that the year 2013 has upheld to be quite a full year for the actor, she has 3 movies in her plate- two Hindi movies and one Kannada film.

She wants to enjoy the next whole month with her family. When asked so, does this mean Veena Malik is planning on coming back to Pakistan? She replied: “No, my parents are coming to me!” She says. Good call, Veena.