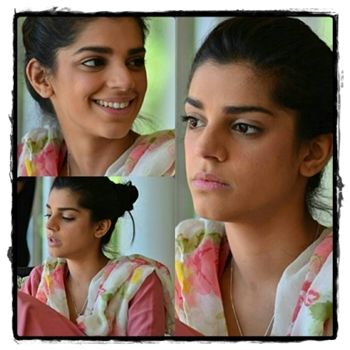 Sanam Saeed is one of the leading Pakistani actress who started her career as a model then started to drama industry. She has made the best dramas to her record.  Her last drama was Zindagi Gulzar hai which was aired in different countries where her works is greatly appreciated.

"That’s my achievement actually - when a mother says that she didn’t marry off her 14-year-old daughter because of me, or when a woman tells me that she continued to study after watching my dramas - those comments mean a lot,” says Sanam Saeed.

Actress Sanam Saeed was invited to the fourth episode as a guest on talkshow Tonite with HSY. Introducing Sanam on his show, host HSY said they were childhood friends and Sanam was known to be a tomboy who excelled at acting.

When asked to Sanam she said “though I am a tomboy at heart, but have to keep up a certain image because "majboori hai."

Speaking about her dramas, Sanam pointed out that the reason she doesn’t do ‘beautiful’ roles but serious ones  is because she wanted dramas to bring a change in society.

Sanam is currently busy with her upcoming movie. “Bachana” where she plays a chulbuli, happy-go-lucky role for a change. I like character-driven roles” said by Sanam Saeed.

She added that she might not be close to any particular person in her field but she gets along with everyone at work. Sanam, whose wedding made headlines last year, said she'd known her husband Farhan since childhood.