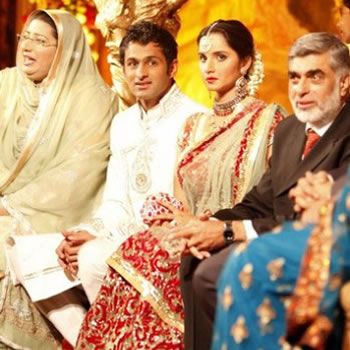 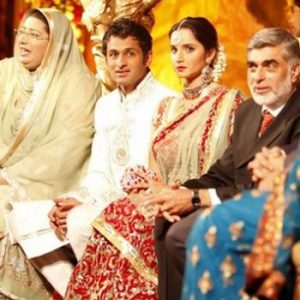 The couple is continuously facing conflicts ever since they have announced the news that they are getting married.

We are not going to give you the last controversy of Shoaib & Sania; as they are finally married now, but we are telling you the latest one.
Pakistani cricketer Shoaib Malik, who married Indian tennis player Sania Mirza, demanded huge amount of Rs 3.5 crores from the media for the reporting rights to his ‘Walima’. The news is in the air that he charged media for the coverage of their wedding function and reception ceremony in Sialkot. Later on, no news channel paid the amount and didn’t even show the interest to have such deal; as a result, Shoaib asked the security to keep the media away from the wedding function.
Rumors are also in the air that after having the Walima in Sialkot, Shoaib Malik again disappointed the people in the very next and finally last function of his marriage in Lahore. One of his ‘claimed’ relative was selling the card of Shoaib’s wedding and a person bought it; afterwards when he failed to attend the function even with the card, he filed the case. The case was filed in Lahore High Court against Shoaib. Other than this, Shoaib Malik also faced the legal notice of violating the rules of serving more than one dish at the wedding function and for didn’t end-up the function before 10pm. These are the rules of the region from the government.
So gossip lovers, what will be the next controversy of this series of controversies related to Shoaib & Sania, we will definitely keep you updated.
0 0 0 0
February 20, 2017
Advertisment