Ayesha Khan’s Reply on Her Relationship With Hamza Ali Abbasi

Yesterday, the internet woke up to possibly the most shocking news of the month- Ayesha Khan announcing her wedding with Major Uqbah Malik!

In a cordial Instagram post, Ayesha Khan revealed her handsome fiance to the world with whom she was engaged for a year!

A post shared by Fashion Central Official (@fashioncentral.official) on Apr 3, 2018 at 11:21pm PDT

The announcement was followed by Aisha’s decision to leave her media career. While some of her fans were overjoyed by the starlet’s latest development in life, the rest were heartbroken.

Well, not that they had any chance with the haseena!

Then there were some keyboard warriors who began trolling her over her relationship with Hamza Ali Abbasi! 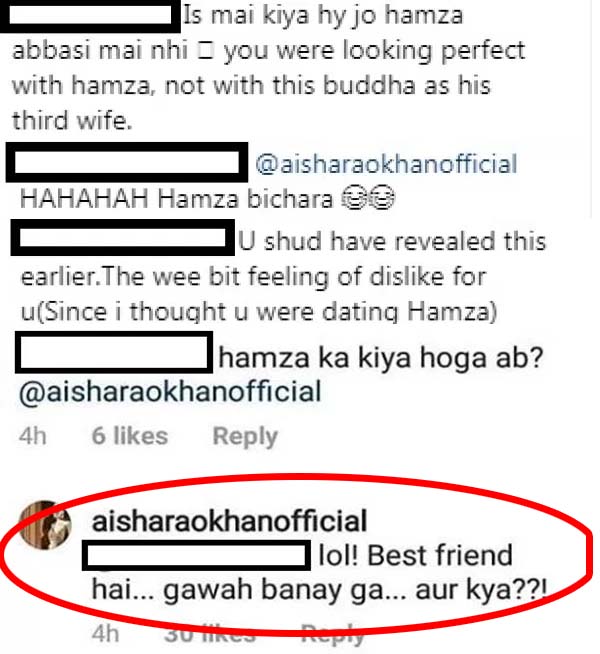 Well, there are some fans who always confuse between real-life and reel-life.

Both Ayesha and Hamza have shared screen space various times before and have enjoyed crackling chemistry together.

A post shared by aishakhanofficial (Aisha khan) (@aisharaokhanofficial) on Oct 22, 2017 at 5:42pm PDT

A post shared by aishakhanofficial (Aisha khan) (@aisharaokhanofficial) on Oct 20, 2017 at 3:33pm PDT