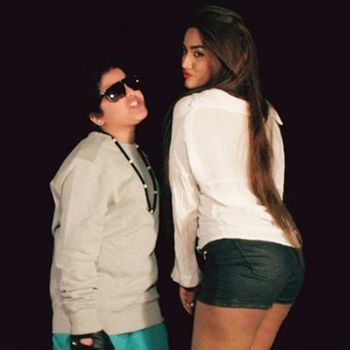 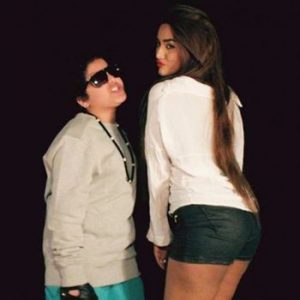 The New Year celebration begun with a boom and we already have a music video from model-host-singer Mathira. Titled ‘Jootha,’the jazzy hip-hop is an upbeat song. A pop hybrid song has Mathira collaborating with a 12 year old rapper Arbaz Khan. The video features many quintessential; if not cliche, hip-hop video tropes with such flashy cars, motorbikes and the sensational sexy, the lyrics are similarly ‘pop’ based on a romantic relationship.

Mathira sings about her “deewana” and interesting her deewana is the child rapper, who barely reaches her shoulders, both of them sidle up to each other in the video’. The interesting line in a song is “Tu saath meray achi lagay (you look good next to me)” the young boy raps as he puts his arms around Mathira at one point in the video. Later in the lyrics, the relationship is compared to that of Jay-Z and Beyonce.

This is not first time that Mathira’s sang a song. Last year, the model and host began her career hosting a late-night talk show released her debut music video ‘Jadugar,’ which was accused of being a copy of a song by Romanian dance-pop act Ackent.

Later in 2013, Mathira was cast as an item girl for actor-turned-film-maker Humayun Saeed’s Main Hoon Shahid Afridi. She also performed an item song for Punjabi film Young Malang, produced by Rahulinder Singh Sidhu. The Music of Jhoota is done by Sharaf Qaisar and Film under the banner of Beyond Studios.