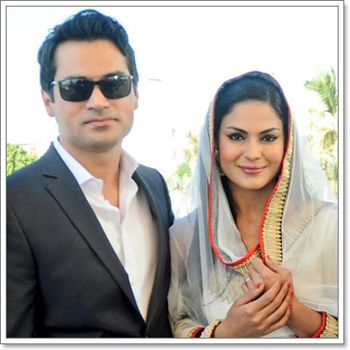 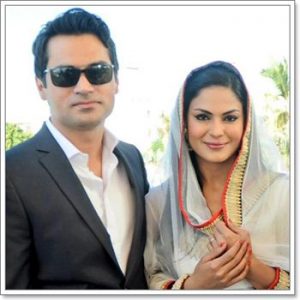 Many of the big names of our Pakistani television industry are accountable today for their active participation in the blasphemy act of Prophet Muhammad (PBUH).

Geo Television Network was accused of blasphemy after it ran a program insulting the family of Prophet Muhammad (PBUH). The four people including Mir Shakeel Ur Rehman, Shaista Lodhi, Veena Malik and her husband Asad Bashir Khatak convicted were also ordered to pay a fine by selling their properties and surrender their passports, according to a copy of the court order.

The first victim considered was the Pakistani actress Veena Malik, who made her mark in Bollywood, has enjoyed the stardom and then selected to live a happily married life with her husband Asad Bashir Khatak and her new born baby.

This lady has faced the major controversies in her life and this time when she has quit almost everything related to the TV and Film industry she faced the biggest trouble. The controversy never seems to leave her away as her problems are not coming to an end till now.

Recently Veena Malik and her husband was awarded by the court for 26-year incarcerations and was also fined them Rs. 1.3 million Pakistani money.

Not only her but the owner of the country’s biggest media group Geo TV, Mir Shakil-ur-Rehman to 26 years in prison for broadcasting a show which they said it was blasphemous.

The host of the show Shahista Lodhi was also announced by an anti-terror court in the city of Gilgit, which is controlled by Pakistan territory but also part of the Kashmir region which India also claims.

The Sufi musicians sang a devotional song about the wedding of the Prophet Mohammad’s (PBUH) daughter on which the guests, Veena Malick, Asad Bashir and the host Shahista were dancing.

Malik returned to Dubai two weeks ago from the US after giving birth to a baby boy. Her lawyer has already started the work to appeal against the verdict in higher courts.

Shocked Veena Malik said, “It’s a shock to me but I have complete faith in Pakistan’s higher courts and judiciary … This court works separately from the other courts in Pakistan. There are higher courts in Pakistan such as the Supreme Court. Whenever there is an issue a court will look into the facts of the case. We were not even present in the court at the time of the verdict. I have belief and trust in courts.”