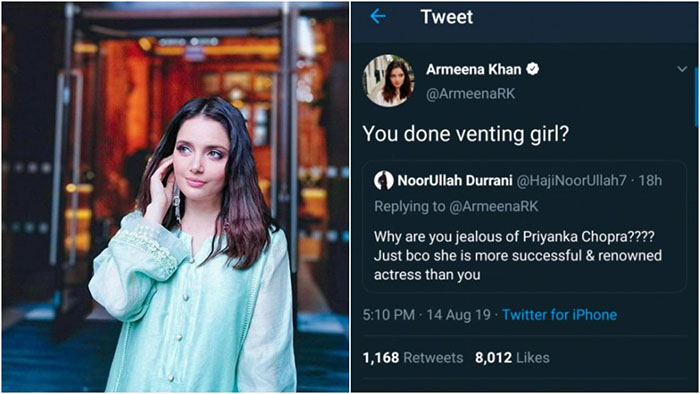 Armeena Rana Khan and her fiance Fesl have written an open letter to the UNICEF, urging the international organisation to act against its Goodwill Ambassador Priyanka Chopra. Taking to Twitter on Monday, Armeena shared her open letter to the UNICEF. In the letter, Khan warned the international body that if they did not take action against Priyanka Chopra, then she would urge the people of Pakistan and its elected leaders to distance themselves from the global organisation.

In the letter, she pointed out how Priyanka had cheered for the war on February 26 when the UN, UNICEF’s parent organisation, was urging both nuclear-armed nations to remain calm.

Khan pointed out the hypocritical stance taken by Priyanka after a Pakistani girl called her out recently at a public event in Los Angeles. Ayesha Malik, a Pakistani, had called out Priyanka for glorifying war. “You are a UNICEF ambassador for peace and you’re encouraging nuclear war against Pakistan. There’s no winner in this,” said the woman who called her out in the video. “As a Pakistani, millions of people like me have supported you in your business of Bollywood and you wanted nuclear war.” Priyanka trivialised the question and told the woman “don’t yell girl, don’t embarrass yourself”.

A video shows that instead of responding to the woman’s statements, Priyanka said ‘I have Pakistani friends’.

Priyanka Chopra tweeted during a time when we were this 👌🏽 close to sending nukes to one another. Instead of advocating for peace she tweeted in support of the Indian army pic.twitter.com/LhbMkOW59v

She proceeded to patronisingly say she was “patriotic” and that she was sorry if that offended anyone. In February, Priyanka had tweeted ‘Jai Hind’, which is the equivalent of ‘Pakistan Zindabad’, after India claimed to have conducted airstrikes in Pakistan. She was criticised for praising the Indian Army at a time when people were calling for peace between the neighbouring countries. The tensions between the two countries have once again flared up following New Delhi’s move to downgrade and reorganise the region of Jammu and Kashmir. Pakistan decried the move as illegal and announced to downgrade diplomatic ties with India and suspended bilateral trade.

Where are Pakistan’s representatives to reply to this? Where is our love for the people who idolise and follow us? Will anyone respond clearly and categorically to this because she is a walking disgrace to the very word “humanitarian.” https://t.co/53dPawe6Jk

Hats off to you armeena

Shouldn’t the letter include @AnupamPKher as well, a UN ambassador for gender equality who appears to favor a (final) solution for #Kashmir https://t.co/pV2wTPcE9i

You should turn it into a petition.

I wanna take this moment and really appreciate the efforts you’re making when most of the celebrities decided to stay quite. Tells us who uses social media for publicity and who is actually woke.

Official UNICEF Response: Thank you very much. We however have an organisational policy of not encouraging stupidity. We have now securely deposited this letter where it belongs – in the dust bin. Get a life! 👍😂🤣 #sarcasm

It will be delivered in person during the Kashmir rally in London. Thousands will MARCH. It will be recorded and they HAVE to respond to it. You thought this was going to go away? Awww Cute 🙂 https://t.co/lkFfdwrAjc

Wow! Some ppl can get soo low to get publicity! Ms.nobody aka @ArmeenaRK just to educate u…@priyankachopra besides being a worldwide loved celebrity has & should have a opinion tht shdnt be effected to who she is globally. So chill & relax! #priyankachoprajonas 🙏🏻🤲🏻😘❤️💕👏🏻🙌🏻🤘🏻

Why you following me? 😉

Why are you jealous of Priyanka Chopra???? Just bco she is more successful & renowned actress than you

Questioning and holding ppl in positions of authority to account is not jealousy. Other Bollywood celebs tweeted but that’s ok. She is an ambassador to an organisation working for victims of war/in danger. A “patriot” logically cannot stay neutral. She can’t do justice here. https://t.co/u3AXGQm98h

The amount of threats and abuse I’ve received in the last 2-3 days is unprecedented but I want all these Nazis and kambakhts to know that I’m not giving up. Try and stop me. #humanityfirst #kashmirbleeds

*** LET ME FIX THIS HEADLINE*** After Priyanka Chopra is royally SHUT down BY A Pakistani woman at US event, Pak actress Armeena Khan urges UNICEF to remove her as peace ambassador AND RIGHTFULLY SO ❤️ https://t.co/SbB4Kwyjc0

Boney Kapoor: When SriDevi Got Pregnant, I too Gained Weight

Here’s What Pakistani Celebrities’ Take on Indian Brutalities in IOK

Here's What Pakistani Celebrities' Take on Indian Brutalities in IOK