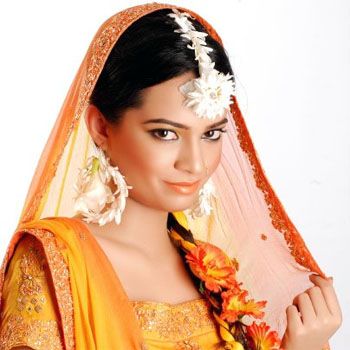 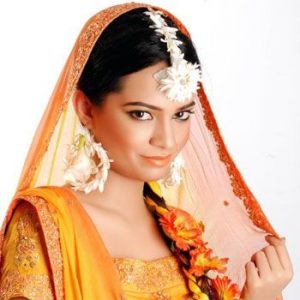 Mehndi day makeup has to be appropriate for the bride to look good on the day for the occasion to be special for her.

Mehndi is a traditional occasion which is considered to be a part of pre-wedding celebration which is now arranged as a separate function during the wedding days. Girls and boys look forward to the merry making of this day. Before the big day the bride and the groom have to look good and simple on this day.

Mehndi is an occasion on which the bride does not want to spend too much money on the heavy makeup or get it done from the beauty parlours. But gone are the days when the bride used to sit on the stage during the Mehndi function with a pale face and eyes without makeup which look sleepless and tired. Some simple Mehndi day makeup tips have to be followed by the bride. The major makeup tip is that the bride has to apply the appropriate base coat with a touch of face powder if the skin is oily, along with a nice mild colour of eye shade which goes with the colour of the dress. Usually Mehndi dress colours of the bride are shades of yellow, orange and greens. So a mild gold or a light brown colour of eyeshade blends in with the dress colour and the light base. The bride has to be conscious about the makeup because her final and ultimate look has to be saved for her big day, and she needs to look almost as good on the Mehndi day as well.

With this Mehndi day makeup the bride’s pictures of the day will turn out to be brilliant. A little while ago when the bride used to sit in her Mehndi dress without makeup and end up looking pale and weak.

The girly fresh makeup will make the day special for the bride and the happiness that the groom will get by the sight of her going to be wife will be priceless.