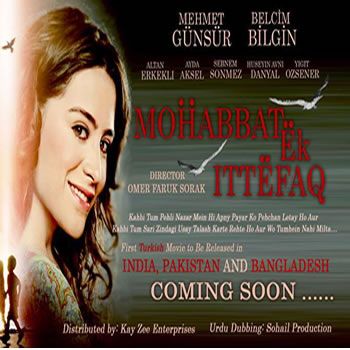 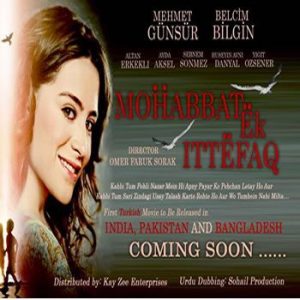 Turkish dramas are very famous in Pakistan and now Turkish movie Muhabbat-Eik-Itefaq after the hit drama Ishq-e-Mamnoo is a journey from a small screen to the large and silver screen.

After the telecast of numerous Turkish dramas dubbed in Urdu ranging from Ishq-e-Memnoo to Fatima Gul to Junoon Tere Ishq Ka, viewers have very fine flavor of the drama industry in Turkey.
However now it is the golden time for Turkish film and drama industry to telecast their film on the silver screen of the Pakistan named ‘Muhabbat Eik Itefaq’ it will be the first Turkish film that will be launched and telecasted in Pakistan.
Turkish dramas tend to be named from the Urdu words, Indian native in addition to Bangladesh likewise. The story of this film revolves around Deniz who is in love with Buraq but the main problem is this that the parents of the burq are not agreed at this proposal and not are agreed to marry Buraq with Deniz. However, Deniz is an ambitious girl and she refuses to give up her career at any cost.
On the other hand Ozgur is a photographer who meets Deniz in an exhibition and they realize that they both are met before. At this point the love triangle starts and Ozgur fall in love with Danes. Deniz’s acting career entangled with her relationship with Buraq and then Ozgur falling for Deniz. This love triangle is the film to see with full classic climax and interest.
It is the success of the Pakistani film production department to successfully dub the voices of the Turkish actress to the Urdu.
0 0 0 0
February 20, 2017
Advertisment